The story behind the CURSE OF THE LOST ISLE series

As I start writing the last book (#8) in the Curse of the Lost Isle series, I realize this project has been twenty years in the making. Twenty years? Where did the time go?

That summer of 1996, I was vacationing in my mother's village, in western France, a tiny place named Vouvant, voted one of the most beautiful villages in France. As I walked through the local museum, a silver and blue tapestry in a special exhibit piqued my curiosity. The scene of a noble wedding between Melusine the Fae and Sigefroi of Ardennes, first Count of Luxembourg. I did a double take. The date on the label: 963 AD.

You see, in Vouvant, Melusine the Fae is the local celebrity. Cursed since childhood to become a mermaid on certain days, she nevertheless married knight Raymond of Forez, with whom she started the famous and infamous family of Lusignan. Among her descendants are Eleanor of Aquitaine, Guy de Lusignan, Robert of Lusignan (Kings of Jerusalem and Cyprus) even King Richard the Lionheart. She built fortresses to protect the entire region and is said to have built the castle of Vouvant with the tower that bears her name in one night... to protect the village against invaders... but that was in the late eleventh or early twelfth century. So how could she be in Luxembourg in 963, even less marrying its founder, Count Sigefroi?

I could never resist a mystery, so I started digging. I went from local castles to museums, asking questions, visiting libraries, finding old accounts of ancient legends, translations and studies of medieval myths, gathering historical details. To my great surprise, Melusine the Fae appeared at different times in history in different places in Europe, with a similar curse and a different story. First in Luxembourg, then in Forez, and later in Lusignan near Vouvant.

I learned that her mother was Pressine the Fae, who married King Elinas of Alba (ancient Scotland) during the Viking invasions in the early 800s. Melusine also had two sisters, Palatina and Meliora. All of them cursed for abusing their powers in childhood. The only problem was, their story spanned too many centuries. From their birth in the 800s in Scotland during the first Viking invasions, all the way to the Crusades in the 1200s.


The early accounts of the legends, written in the 1300s and the 1400s varied greatly. I found genealogies, scholarly studies of the myths, and a host of historical facts. The writer in me saw an opportunity. A series... a family of Fae... persecuted for their powers, roaming the medieval world in search of redemption from a curse... and they had to be immortal!

I wasn't published yet, but I had three manuscripts with an agent. When I returned home to Arizona, I told my agent about my idea and she gave me her blessing with great enthusiasm. So I started writing.

My agent shopped the idea for the series. No one wanted to hear about it. It was a mix of several genres, historical, fantasy, and romance. I didn't have a following to guarantee booming sales. No one wanted to take a chance on such a series... especially from an unknown author.


In 2000, my first contemporary novel came out, then two science fiction novels. Many other sci-fi and romance novels followed with various publishers, but still no interest in my immortal ladies. My agent retired. I kept pitching the series to other agents and publishers. No dice. I put them on the back burner but kept writing and researching in my spare time. Over the next ten years, each trip back to Europe became an opportunity to research a different location where the legends occurred.

In 2010, I signed up with Books We Love Ltd, a Canadian publisher who was reissuing my back list of out of print books. They liked my writing and asked me if I had any original works for them to publish. I sent them the first book of my immortal ladies and they loved it. The rest is history. Seven books are now published in the Curse of the Lost Isle series. The latest, DAMSEL OF THE HAWK (the story of Meliora) came out last month, and I'm just starting the very last novel in the series, ANGEL OF LUSIGNAN, which should come out in December or January.

It boggles the mind that this series has been my obsession for the past twenty years. I hope the readers enjoy the experience I created for them. I'm going to miss these wonderful characters when I write "the end" on this last novel. 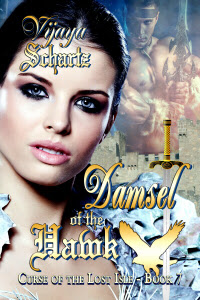 DAMSEL OF THE HAWK
Curse of the Lost Isle Book 7
in kindle and paperback: https://amzn.com/B01CH93SNM

1204 AD - Meliora, the legendary damsel of Hawk Castle, grants gold and wishes on Mount Ararat, but must forever remain chaste. When Spartak, a Kipchak warrior gravely wounded in Constantinople, requests sanctuary, she breaks the rule to save his life. The fierce, warrior prince stirs in her forbidden passions. Captivated, Spartak will not bow to superstition. Despite tribal opposition, he wants her as his queen. Should Meliora renounce true love, or  embrace it and trigger the sinister curse... and the wrath of the Goddess? Meanwhile, a thwarted knight and his greedy band of Crusaders have vowed to steal her Pagan gold and burn her at the stake...

There is also a boxed set of the first 4 novels in kindle for a friendly price. CURSE OF THE LOST ISLE boxed set 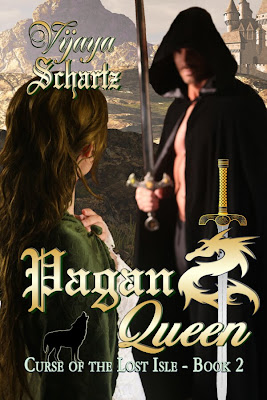 810 AD - Alba (Ancient Scotland) -  Queen at last, Pressine brings victory to her beloved Elinas and prosperity to their growing kingdom. Still, she has to contend with the intrigues of Charlemagne's bishops, spurred by her Christian stepson. While Elinas, on the battlefield, remains unaware of his son’s machinations, Pressine fends off repeated assaults against her life. She also fears the curse that could bring her downfall. For the love of Elinas, she will tempt fate and become with child. But when her indomitable passion challenges the wrath of the Goddess Herself... can she win that battle?

"Schartz is an accomplished writer, whose pacing, conflicts, and goals are always complex and whose good characters are always likeable, and whose villains are evil incarnate. You have to like her villains as much as the good guys! Mattacks is a magnificent example of this!" Manic Readers

"...attention to the details of the period makes that long ago era of history feel alive and vibrant. She's able to weave in the mystical in a manner that appears natural, without overwhelming what else is going on. I enjoyed learning more about Pressine and Elinas, but Mattacks and his diabolical plans play an important role... his character flaws are eye-opening... watch for interesting twists and turns... unexpected happenings totally caught me off guard... I want to know more..." Romance Junkies

Other books in the series:

There is also a boxed set of the first 4 novels in the series:
CURSE OF THE LOST ISLE

Happy reading!
Posted by Vijaya Schartz at 1:30 AM No comments: 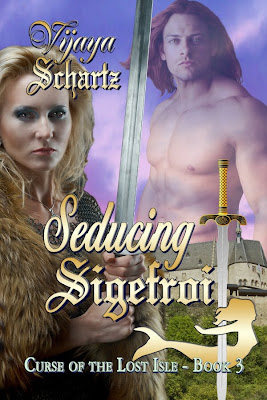 Luxembourg - 963 AD - To offset the curse that makes her a serpent from the waist down one day each month, Melusine, exiled Princess of Strathclyde, must seduce and wed a mortal knight, the shrewd and ambitious Sigefroi of Ardennes.

Sigefroi, son of the Duke of Lorraine, suspects Melusine is not what she appears, but her beauty, her rich dowry, and her sharp political skills serve his ambitions. He never expected her to soften his stone-cold warrior heart.

So close to the Imperial court, dangers and intrigue threaten Melusine. War looms on the horizon, a Mermaid was sighted around Luxembourg, and Sigefroi’s bishop brother questions her ancestry. If anyone ever suspects Melusine’s true nature, she will burn at the stake...

"Ms. Schartz did a fine job with this offering, and brought elements to the myth that fleshed Melusine out and made her a sympathetic character. I think fans of Fantasy romance will enjoy this steamy version of the myth and fans of the myth might find it interesting as well." - Julianne Draper - The Examiner

There is also a boxed set of novels 1 through 4, CURSE OF THE LOST ISLE, for a very friendly price.
Find all my books HERE

Posted by Vijaya Schartz at 1:30 AM No comments: