Lady of Luxembourg has a kick-ass cover - by Vijaya Schartz 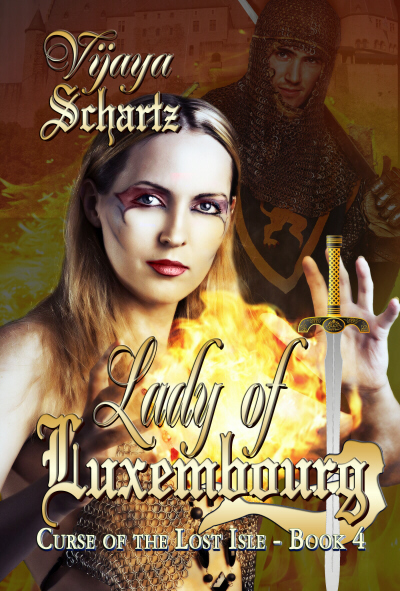 This is a first peek at the cover of LADY OF LUXEMBOURG, Book 4 in the Curse of the Lost Isle medieval series. The artist is Michelle Lee, and she designed it for Books We Love. I absolutely love it. My heroine is depicted as Fae, strong, and wielding magic. Also love the sword with the mermaid. The sword runs through all the covers in the series, but the first two books had a dragon, and since this heroine is an ondine (she transforms into a mermaid on specific days), it keeps the theme running.

Fire is also a strong element in this particular novel. The fires of hell, the threat of being burned at the stake, and the magic fire Melusine wields in the service of the Pagan Goddess she worships.

I hope you like the cover as much as I do. I did have some input in this cover and I am very grateful my publisher is allowing me to participate to this degree.

The book should be out in kindle in a few days. In the meantime, don't forget to re-read or read the first three books, PRINCESS OF BRETAGNE, PAGAN QUEEN, and SEDUCING SIGEFROI. You can find them all in kindle at AMAZON

Don't miss free today in kindle, for the very last time, the first three novels of the CURSE OF THE LOST ISLE series in one download at: http://amzn.com/B0091HX7EE

﻿
﻿
Book 4, LADY OF LUXEMBOURG, is in the last editing stages and will be out this month. I'm very excited about it. ENTER MY CONTEST TO WIN LADY OF LUXEMBOURG as soon as it is published at:
http://www.vijayaschartz.com/contest.html

Now I have to clear my desk from all the research papers, books and pictures on the foundation of Luxembourg, and move on to something else. But I'm not sad, because this series has many more books to come, and I'll be back writing it very soon. Book 5 in this exciting series﻿, set in Forez (between the Rhone and Loire rivers) in the eleventh century, is tentatively titled CHATELAINE OF FOREZ, but this is only a working title. That book should be released at the end of this year.

For the next three months, I'll be writing a sci-fi romance novella in the BOREALIS universe for another publisher (Desert Breeze) with whom I only publish sci-fi romance.

In the meantime, you can find all my eBooks and paperbacks at all major online retailers:

1066: The Action Replay by Joanna Fulford

Saturday 14th October 1066 is the date of Battle of Hastings, one of  the most momentous events in English history. On that day the Anglo Saxon army, under the leadership of King Harold, was defeated by a force of Normans, Flemings and Bretons led by Duke William of Normandy, later to be crowned King William I of England.

Every year, to mark the anniversay, there is a re-enactment of the battle, held on the hill just outside Battle Abbey.  For a lover of early medieval history it's a must-see event.  Unsurprisingly, it attracts visitors from far and wide.  However, anyone anticipating medieval-style carnage is doomed to disappointment: slaying people (even the French) is forbidden, and bloodshed and mutilation are also discouraged.   Even so, when several hundred individuals are swinging swords and axes accidents sometimes happen.  Broken fingers and bruises are the most common injuries.  No doubt it hurts, but it seems fairly trivial when you think about what happened to King Harold.
Despite the lack of gore, what this event does offer is a real insight into the conduct of the battle, which, at two distinct points, could have gone either way.  With the benefit of 20:20 hindsight you'd think the Anglo Saxon army would have learned from past mistakes but they never do.  The Normans win every year.  Nevertheless, the atmosphere is astonishing.  When the Norman cavalry comes charging up the hill towards the Saxon shield wall, the ground shakes under the horses' hooves and air reverberates with the battle cries of the opposing armies.  I promise you, it raises all the hairs on the back of the neck.

Much as I enjoy the re-enactment of the battle, the most valuable aspect of the whole experience is the time spent walking round the encampment speaking to individual re-enacters.  Their passion for the period is immediately apparent and their knowledge and skills impressive.  They are a friendly crowd and are also generous with their time.   As a result I have learned an enormous amount: everything from making chain mail and scabbards to turn shoes and medicines.  For this I am sincerely grateful and, where possible, I incorporate the information into my stories to strengthen the period detail.

My only reservation about the Battle of Hastings re-enactment is concerned with the location.  I suspect it's not the site of the actual battle.  First, the topography doesn't agree with surviving accounts of the event.  I know it was a thousand years ago and landscapes can change dramatically in that time, but there are still inconsistencies that are hard to explain away: the absence of the Malfosse for instance.  This is the ravine where, we're told, the Saxons fought a fierce rearguard action and killed a large number of the French.   Secondly, there's the total absence of archaeological evidence.  Accounts vary about the numbers involved in the battle: anywhere up to 15,000 men in all.  Yet successive digs on the site have failed to uncover any remains.  The reason given up till now is acid soil which, it is claimed, has eroded everything.  That raises questions, in my mind anyway.  Consider the Staffordshire Hoard and the magnificent relics exacavated at Sutton Hoo.  Those treasures had all lain in acid soil and survived and they predate Hastings by 400 years.  The Staffordshire Hoard alone comprises over 3000 items.  Yet not one relic of a large-scale conflict remains at the alleged site at Hastings: not a rusting sword blade, shield boss, scabbard or harness mount, fragment of chain mail, spur or horse shoe.  To me, that doesn't add up.  If nothing has been found I suspect it's because people are digging in the wrong place.  There's another hill, not far from the present re-enactment site, which is a possible candidate for the true battlefield.  It would be interesting to see what an archaeological dig there might uncover.
Posted by Joanna Fulford at 9:00 AM No comments: