A Year of Omens by Joanna Fulford

The Anglo-Saxon Chronicle for the year 793AD states: “This year came dreadful fore-warnings over the land of the Northumbrians, terrifying the people most woefully: these were immense sheets of light rushing through the air, and whirlwinds, and fiery dragons flying across the firmament.  These tremendous tokens were soon followed by a great famine, and not long after, on the sixth day before the ides of January in the same year, the harrowing inroads of heathen men made lamentable havoc in the church of God in Holy-island by rapine and slaughter.” 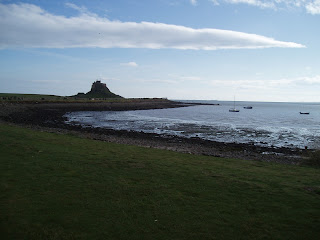 When they looked out across the North Sea on that fateful day in 793 and first glimpsed the approaching sail, the monks of Lindisfarne (Holy Island) had no idea of its significance.  Accounts of the event suggest they were taken completely by surprise and were unable to defend themselves against the onslaught of the Viking warriors.  Many of the monks were slain, others stripped and beaten before being driven off.  Everything of value was seized.  Holy books were burnt, crosses thrown down.  This incident heralded the beginning of numerous Viking incursions that were to plague the inhabitants of Britain for the next 250 years.


At first the Norsemen were content to conduct lightning raids in which they attacked vulnerable coastal settlements and carried off slaves, livestock and plunder.  However, the shallow draught of the Viking long ships meant that they were ideally suited for navigating rivers as well, and thus affording further opportunities for raiding parties to venture into the hinterland.  Having taken what they wanted they would retreat the same way. 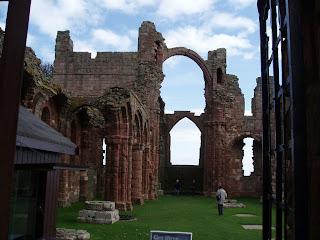 Viking policy changed irrevocably in 865 AD.  This was the year of the Great Viking Invasion.  King Aella of Northumbria captured the famous Viking chief, Ragnar Lodbrok, and had him thrown into a pit of poisonous snakes.  When news of this evil deed reached them, Ragnar’s sons, Ingvar, Halfdan and Hubba, raised a huge fleet and set sail for Northumbria, seeking revenge for the death of their father.  In fact the fleet was blown off course and landed in East Anglia further down the English coast.  The crews looted the abbeys at Ely, Crowland and Peterborough where, it is alleged, Hubba killed seventy monks himself.  After this the army headed north, conquering much of Mercia and taking the city of York.


Had the kingdom not been riven by internal factions fighting amongst themselves, the city might not have fallen.  As it was, the two petty kings, Aella and Osbert, were so preoccupied with jockeying for position that they failed to see the real peril.  By the time they came to their senses it was too late.  They raised an army and attempted to retake York.  The Anglo Saxon Chronicle tells us: “Then there was immense slaughter of Northumbrians, some within and some without (the city) and both the kings were slain on the spot.”  If Osbert died quickly he was fortunate.  When the Vikings executed Aella it took the form of the blood eagle sacrifice.  For good measure they threw salt into the wound as well.
The Viking army over-wintered in York but, when spring came, they didn’t depart for their overcrowded northern homeland.  England was a rich and fertile country and the Vikings saw their opportunity.  They stayed and settled and intermarried with the local population.  Eventually Northumbria became part of the vast region which was known as the Danelaw.
These events form the background to my story The Viking’s Defiant Bride and its sequel The Viking’s Touch.  Quite apart from offering a dramatic external conflict, the period afforded numerous possibilities for strong emotional conflicts involving divided loyalties, and exploration of the relationship between the conqueror and the conquered. 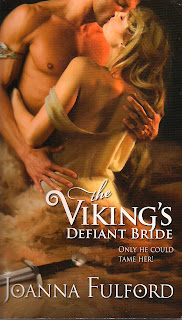 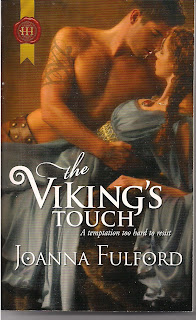 Posted by Joanna Fulford at 7:00 AM