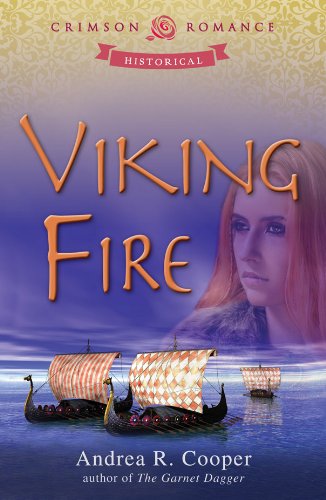 In 856 CE, Ireland is a land of myth, magic, and blood. Viking raiders have fought the Irish for over half a century. Rival Irish clans promise only betrayal and carnage.

Kaireen, daughter of Laird Liannon, is suddenly forced into an arranged marriage with her sworn enemy, a Viking. She refuses to submit. With no mention of love, only land and the protection of her clan, she endeavors to get her betrothed banished from her country. Will love find its way around her stubborn heart?


Bram, the Viking, finds himself without future or inheritance as a younger son in his family. A marriage to the Laird’s daughter would grant him land if he swears fidelity and if his men will fight along with the Liannons against any foe—Irish or Viking. However, the Laird’s feisty daughter only holds animosity for him and his kind. Is marriage worth the battle scars of such a relentless opponent?

With the blame for a rival laird’s death treacherously set against the Liannons, Kaireen and Bram must find a way to lay aside their differences as an unforeseen darkness sends death snapping at their heels.

I renounce Father for this.” Kaireen threw the elderberry gown.

"Shame on you and your children for speaking such.” Her handmaid, Elva, gathered the damask and then dusted off the rushes. “It’s a wonder one of the clim has not scolded you from your hearth for such talk.” “No, curse Father for a fool.” She plopped on her bed and a goose feather floated away. With a huff, she leaned against the oak headboard. Red curtains puffed like a robin’s chest around oak poles supporting her wooden canopy. Her bare feet brushed against the stone floor.

"You know your da arranged a marriage within a season.” Elva smirked. Kaireen shook her head. “To another land holder,” and waved a hand in disgust, “not t-this heathen. Twice they raided our land in the last month alone. Now father wants me as wife to one of them?” She clenched her fists. “No, I will not marry this Viking.” Elva smiled, reminding Kaireen of the rumors of her handmaid’s uncanny foresight. Whispers of Elva making strange things happen and often blamed as the cause of Kaireen’s stubborn refusal to behave as a laird’s daughter should. “You’ve not seen him yet.” Elva wiggled her brows. “So?” Kaireen shrugged. “I would like to never see him.” “Well then, would you not like to know if you have a handsome husband or not?” She waited for her response, but Kaireen scowled. Elva chuckled. “I would rather get a good look at him now than the morning after.” Kaireen’s ears heated. “I am not marrying.” She shook her head for emphasis. “So there will be no morning, nor night, nor wedding.” “If he is handsome, I may fight you for him.” Elva smiled, deepening the wrinkles around her eyes. “Welcome to him either way.” Kaireen laughed. Reviews: “Andrea Cooper weaves a tantalizing tale of life in a not-too-civilized Ireland. Best of all she weaves in the unique thread of a courtship filled with fun, fury, and fighting that leads to a love that show how true loves are willing to give their lives to protect each other. Good entertainment.” --Long and Short Reviews

"The story is fast paced with almost constant action. The love story is sweet as Kaireen matures into an incredible and strong woman. Sinister plots and violent betrayals tell a compelling story. A very enjoyable story." --Night Owl Reviews 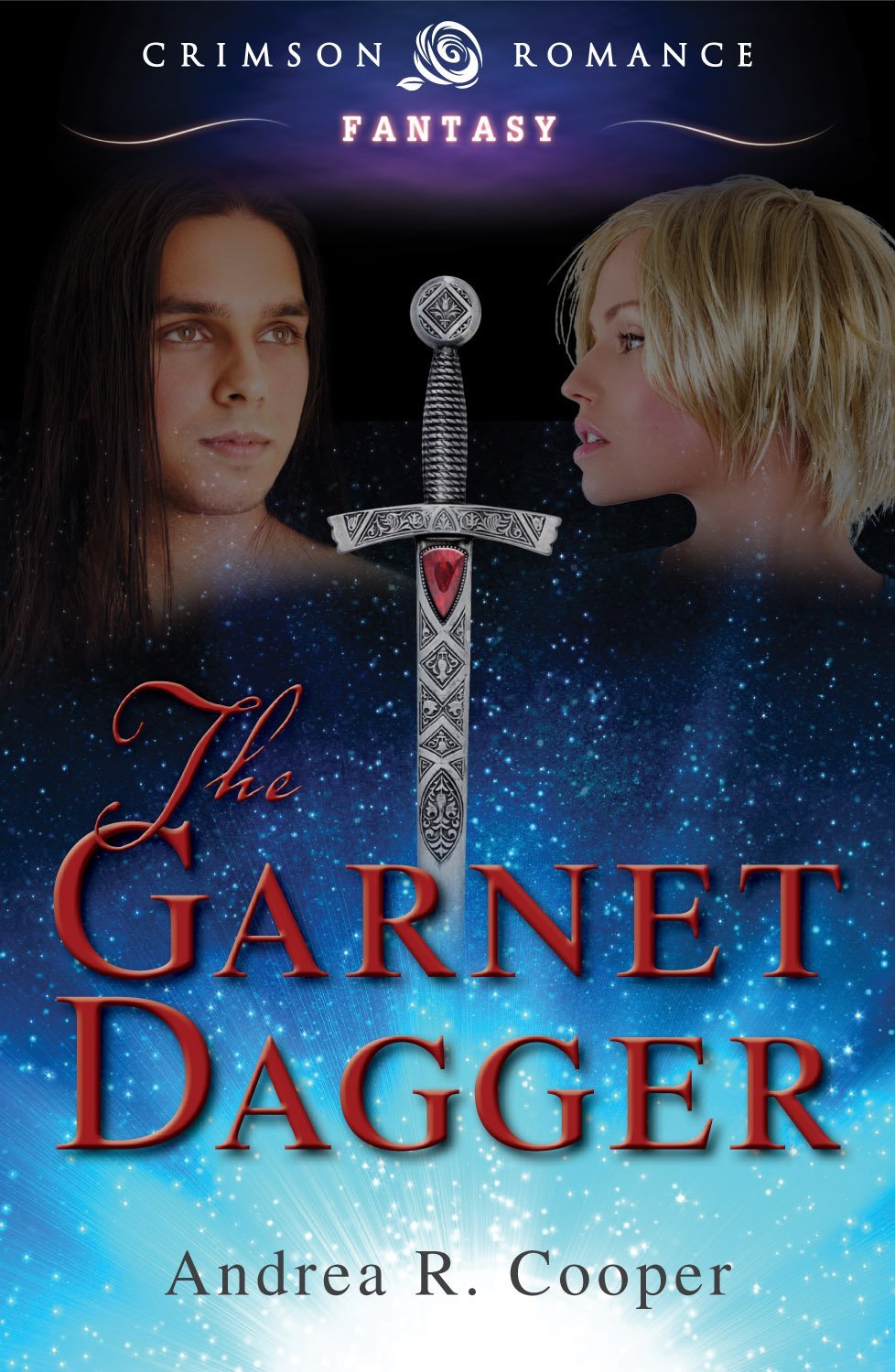 The Garnet Dagger – Book 1 of the Garnet series
http://amzn.com/B00BS9HTBK

Everyone knows what happens when a vampire bites a human…but what if the victim is Elvin? Forbidden to cross the Elvin barrier into human lands, Brock cannot sate his curiosity. Cursed by a vampyre bite that forces him to feed on the life-essence of others, he is unable to touch another without taking their life. Chained by prophesy, he must find a witch, pierce her heart, and draw her blood for his cure.

Celeste must escape the monks who have held her prisoner for years. Her magic has been kept dormant by her captors. An ancient powerful Warloc craves her powers. If he succeeds in devouring her magic, she and his world will die.

When Brock falls in love with Celeste before realizing her demise is his cure, will love triumph over his desire to be healed? Will he risk everything to save her from a Warloc, an oath breaker, who also wants her dead?

I’ve known death. For over half a millennia, I escorted many to death at the end of my sword. In the eyes of the dying, I watched it shroud them. Foolishly, I thought many more eras would pass before death came for me. It came so swiftly that I could not run; I could not escape. At a village, dressed in human clothes, I took in everything.

I delayed my return to my people as I watched human jugglers bounce torches and knifes. It was autumn equinox and the festivities would continue well into the night. Children laughed as they chased each other. A trail of leaves from their costumes twirled after them. It was dark when I reached the forest.

I hiked slower than my normal speed, so as not to startle whatever human called out. My leather boots crunched upon dried, diseased leaves and bark. Horrified, I glanced up. Branches twisted around each other to suffocating. Lifeless limbs cracked in the wind. Flesh of the trees sloughed off in layers, exposing its bones. Gashes hollowed out chunks of warmth. Fragments of leaves clung to finger tips, marking sepulchers of the dying trees. Trees mourned with wails like splitting wood, and I brought my hands over my ears. I must flee before I became infected, they told me. Flee before the stain of this defilement creeps into you, they warned. Trees spoke to my kind, always had. Yet these trees were in such agony of death that I could not breathe. Felt as though my lungs had folded in on themselves, like a moth unable to break loose from its cocoon.

"The Garnet Dagger was a well written story. The author Andrea R Cooper did fabulous world-building. The relationship depicted between the two main characters is flawless. And the description was very vivid. Highly recommended for all lovers of Paranormal romance." --Paranormal Romance Reviews

“Highly recommended for all lovers of Paranormalromance.”Nas Dean
“The setting was darkly beautiful and the imagery brought it tolife.”Katie Cody 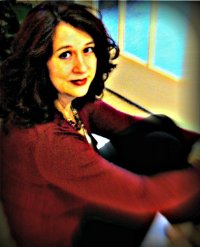 Andrea’s Bio: Growing up in Houston, Texas, Andrea has always created characters and stories. But it wasn't until she was in her late twenties that she started writing novels.

What happened that ignited the writing flame in her fingers? Divorced, and disillusioned by love songs and stories. They exaggerate. She thought. Love and Romance are not like that in the real world. Then she met her husband and realized, yes love and romance are exactly like the songs and stories say. She is now a happy wife, and a mom to three kids (two boys and a girl).

Andrea writes paranormal and historical romance. When not writing or reading, one may find Andrea dancing in Zumba.