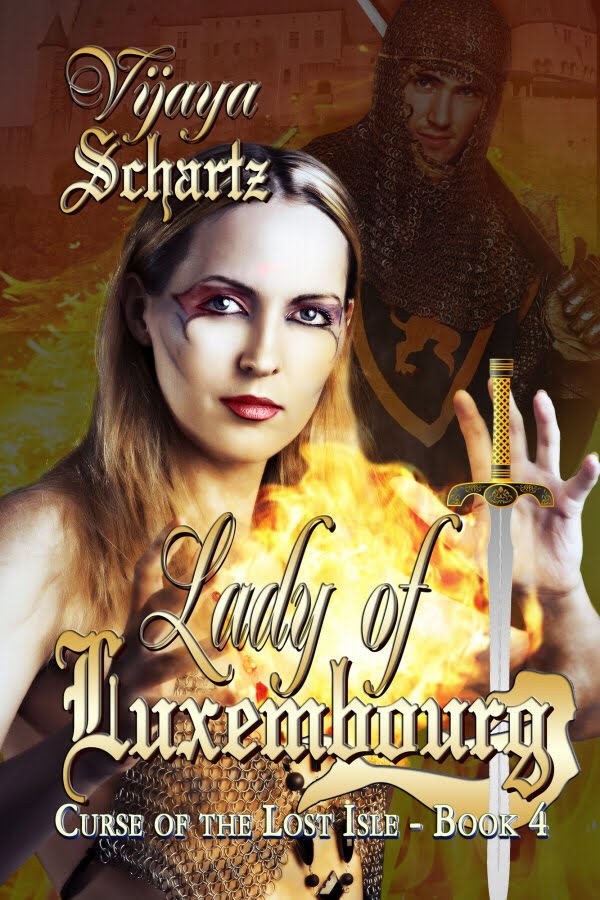 buy it in kindle here
LADY OF LUXEMBOURG
Curse of the Lost Isle Book 4
by Vijaya Schartz
http://amzn.com/B00BO0MYX6

978 AD - Melusine the Fae, immortal and cursed Lady of Luxembourg, managed to hide her Pagan nature from mortals for many years. She fiercely protects her handsome Count, Sigefroi, but in their princely bliss, neither of them seems to age, and a few suspicious bishops take notice. Then an ondine wreaks havoc during a battle, luring enemy soldiers into the river.

Betrayed, Sigefroi reflects on his many sins from the depths of a rat infested dungeon. Under torture, will he reveal her deadly secret? And when her beloved turns into a devout Christian, can Melusine salvage her happiness? Can love truly redeem her curse, or will she burn at the stake?

"Schartz is a gifted writer in many genres, and the research she does for every book is phenomenal. Every detail is woven into the story seamlessly, so you feel as if you are really there, watching the horses, the fighting, the clothing, the lovemaking. Looking forward to the next volume." Manic Readers 5 stars

Sigefroi walked resolutely toward Melusine, his forehead shiny from the fencing yard. The morning sun set aflame his reddish gold hair. He tossed his practice sword to a squire and wiped his forehead with the sleeve of his white tunic. A triangle of moisture stained the red prancing lion embroidered on his chest.
Melusine took hold of his muscled arm and leaned against his tall frame as they wove through the parting crowd. How she relished his scent of clean soap and male. “Who is coming?”
“One of our secret observers at the French court.” Sigefroi grinned and patted her hand on his arm. “Good news I hope.”
Melusine’s insides warmed at his familiar touch. She glanced up at her husband’s smooth, cheerful face. Sigefroi had grown younger and handsomer since taking her elixir. Although well past fifty, he looked like a young knight. He might not be immortal like her, but she would keep him vigorous and healthy for many decades to come. In truth, she couldn’t imagine life without him.
Hooves clattered on the drawbridge across the narrow gorge separating the main plateau from the Bock, the rocky needle on which Sigefroi had erected his fortress. The destrier galloped through the open gate then reared at the sight of the small gathering, nearly unhorsing the rider.
The knight spotted Sigefroi and Melusine, then directed his mount toward them. He dismounted in a jingle of mail, lifted his helmet, set it under his arm and bowed deeply.
“My lord,” he sputtered between broken breaths, then raised his weathered face. Gray hair escaped from his mail hauberk. “The Archbishop of Verdun is marching upon Luxembourg with his army.”
“By Saint Peter’s balls!” Sigefroi uttered under his breath, slamming a fist into his hand.
Melusine swallowed a lump in her throat. “What?”
“That blasted archbishop be damned to hell!” Sigefroi’s brow knit and his jaw clenched. “I hoped it would not come to this.”
Despite the archbishop’s implacable hatred for Sigefroi’s family, Melusine never believed he would dare attack the stronghold of Luxembourg.
The old knight caught his breath and color filled his face as he explained. “The archbishop has over two thousand riders, my lord,” he went on in an eager voice. “And a great army of foot soldiers. They should be less than three days behind me.”
“Three days?” Melusine shuddered as she counted the days in her mind. The timing couldn’t possibly be worse.
“Not much time, but enough.” Sigefroi flashed the old spy a quick smile and patted his armored shoulder. “You did good work and will be rewarded. Now, get some food and rest.”
The knight acquiesced, turned around and walked away, a proud spring in his jingling step.
Sigefroi signaled his captain of the guard, who was exchanging worried glances with Alyx. “Send a messenger to Gunter in Saarburg, and one to my brother, the Duke of High Lorraine, before the pig of Verdun controls the roads. Ask them to send their armies at once. We need to teach that pesky archbishop a lesson.”
“Aye, my lord.” The captain bowed and hurried away.
Melusine stood there, in utter shock. Why hadn’t she foreseen the danger? Wrapped up in her princely bliss, she had relaxed her vigilance and failed to warn those she loved.
Sigefroi faced her and met her gaze. “Can you prepare the castle and make sure all our people are safe inside the walls?”
Aware of Alyx moving closer to her, Melusine nodded. “Are we preparing for a long siege?”
“If our messengers get through, no more than a week.” Sigefroi’s hazel eyes darkened despite the morning light. “But if they are delayed, it could be a month or more. We only have a few hundred soldiers here.”
Alyx stepped forward, eyes wide and round. “But the walls will keep us safe, right my lord?”
Sigefroi pressed his lips and nodded. “These walls have never been breached. And as soon as our armies arrive, it will be all over for the archbishop.”
A strange sensation wrenched Melusine’s gut. How could she have missed the portents of war? She had let danger creep up on her home. May the Great Goddess protect Luxembourg. 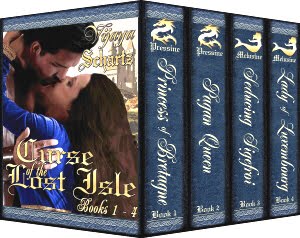 LADY OF LUXEMBOURG is included in the boxed set CURSE OF THE LOST ISLE Books 1 through 4, for a very friendly price everywhere in ebook. http://amzn.com/B00VGMYSCM

Find more of Vijaya's books on her website at: http://www.vijayaschartz.com
Her books are available at various online retailers.
Find them all on Amazon HERE

Posted by Vijaya Schartz at 1:30 AM