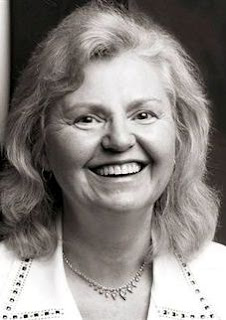 Anna Markland is a Canadian author with a keen interest in genealogy. She writes medieval romance about family honour, ancestry and roots. Her novels are intimate love stories full of passion and adventure. Prior to becoming a fiction author, she published numerous family histories. One of the things she enjoys most about writing historical romance is the in-depth research required to provide the reader with an authentic medieval experience.

Her novel DEFIANT PASSION is a FREE download, today only, in Amazon kindle. Grab it quick HERE


When the Romans departed Britain in the early fifth century the road system they left behind did not disappear, but it did change.
In the medieval period many Roman roads were still being used. The Gough map dating from 1360 shows over 3,000 miles of main roads in use of which around 40% were of Roman origin, including Watling Street, Ermine Street, Fosse Way and the Icknield Way: routes that are still in use today.
The roads shown on the Gough map are the highways that linked the main towns and were used by English kings to travel around the kingdom. If you’re familiar with the current British road system, these were the ‘A’ roads of their day and radiated out from London as far as Cornwall, South Wales, Cumberland, Yorkshire and Norfolk. In addition there was a dense network of local tracks and rights of way linking villages, manors, woods, meadows and heathland.

Very few medieval roads were surfaced, most were simply rough tracks with wide verges and many were simply unmarked rights of way across the countryside. The main highways were often very wide which was necessary to accommodate the travel of armies, wagons and flocks of sheep. In 1118 for instance Henry I decreed that two wagons should be able to pass each other or sixteen knights be able to ride abreast.
In Dark and Bright, one of Rhys’s brothers complains that Baudoin wants to build wide roads so his Norman troops can invade deeper into Wales.
The maintenance of roads was, by and large, the responsibility of the land owner and since the main highways were used by the king these were usually kept in good repair. Land owners were also responsible for preventing attacks on travellers as shown in the Statute of Winchester issued by Edward I in 1285:
‘It is likewise commanded that the highways from market towns to other market towns be widened where there are woods or hedges or ditches, so that there may be no ditch, underwood or bushes where one could hide with evil intent within two hundred feet of the road on one side or the other…And if by the default of a lord, who will not fill up a ditch or level underwood or bushes in the manner aforesaid, robberies are committed, the lord shall be answerable.’ 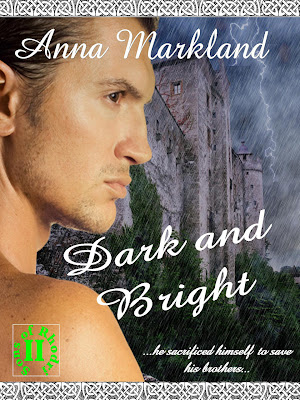 According to manorial records travellers using minor roads could also expect their path to be obstructed by timber, muckheaps, pits and dead horses!
Travelling on Medieval Roads:
Travel was undertaken either by horse or on foot dependent on how wealthy you were, and if the journey was expected to be hazardous you would probably travel in a group with overnight accommodation being provided by Inns along the way; carriages could offer a bumpy ride and were usually reserved for luggage.
On horseback you could expect to travel about 20 miles per day along the main roads. Indeed in 1336 Edward III achieved an average speed of 55 miles per day when he rode from London to York which suggests that medieval roads were not as bad as they are often portrayed.
Unfortunately, Rhys and Baudoin meet with a serious accident during their adventure. That’s as much as I’ll reveal!
In Dark and Bright, now available on Amazon Kindle, my Welsh hero, Rhys ap Rhodri, sets off with his brother-by-marriage, Baudoin de Montbryce, Earl of Ellesmere, on a journey to improve roads in Wales. I researched medieval road building for the book, although most of the information available relates to a period after the one I write about. Rhys undertakes his project in the early years of the 12th century. 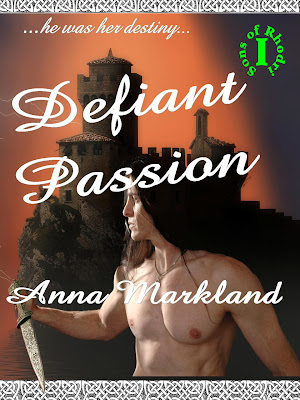 This novella was released shortly after Defiant Passion, which is actually Book One of a new series entitled Sons of Rhodri. This series grew out of the villain-turned-hero character, Rhodri ap Owain, in my first novel, Conquering Passion. Fans of that book will recall Rhodri’s intimate courtship of Rhonwen Dda. Defiant Passion takes us back to before the two met and tells the story from their viewpoint.
There are three books in the Sons of Rhodri series: Defiant Passion, Dark and Bright and The Winds of the Heavens (later in 2012)

DEFIANT PASSION is a FREE download, today only in Amazon kindle. Grab it quick HERE
Find out more about Anna Markland and her books on her website at:
http://annamarkland.com/index.html
Posted by Vijaya Schartz at 12:41 AM