Medieval Heroines can kick butt, too - by Vijaya Schartz 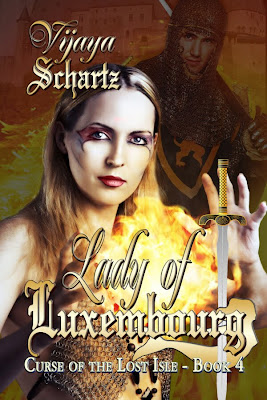 INTERVIEW WITH MELUSINE THE FAE


Find the books in kindle HERE.

My name is Melusine the Fae. Aye, like in immortal beings descended from ancient angels, way before the establishment of Judeo-Christian religions. Part human, part celestial angels, we Fae have a bad reputation on this planet. Especially since Charlemagne decided to impose Christianity in Europe by chopping the heads of all Pagans. But for us Fae, or sorceresses, or demons, or witches, the bishops reserve the pleasure of burning at the stake. That would definitely kill even an immortal like me. So would any violent kind of death.

I hate fire. I am a water creature. In fact, since my mother cursed me, so long ago in Scotland, I transform into an ondine every first Wednesday of the month. Those who call me a mermaid are gravely mistaken. Mermaids keep their fish tail permanenty. Ondines, like me, only transform into water creatures with a serpent tail on certain days. The rest of the time we look, feel, and act like women... but we have many supernatural gifts.

My problem is that ondine curse. I have to concede I deserved it. I was barely out of childhood when I abused my supernatural powers to take revenge upon a human king... my father. At the time I blamed him for all the misery my mother suffered after their separation. My mother was Fae, and also burdened by a curse, and he triggered that curse. I did not understand at the time that humans were weak by nature... well, most humans anyway.

My only hope of redemption from my curse resides with Sigefroi, the shrewd knight of Luxembourg. To serve the Goddess I worship (one of the original angels) I seduced him, married him, and became the first Lady of Luxembourg. I'm good at designing fortresses. I also gave Sigefroi a sword of power that makes his arm invincible in battle. But if he ever divulges my secret, I will be doomed.

Here is the scene of our first official encounter. On that particular day, I was wielding the magic sword, and barred his way in knight's armor, in the middle of the road. The full helmet hiding my face, I lowered my voice to pass as a young man and challenged him to a fight...

Sigefroi's murderous glare drilled into her through the helmet slits. Would he recognize her? Nay. Melusine realized he didn't see her as a person anymore, but as an enemy, a vile thing to crush like a viper on the road. Such barbarism burned in his amber gaze, such determination.

The close proximity of this ferocious man frightened and thrilled her at the same time. Parrying high, Melusine caught a glance of the squire who held the horses at a safe distance. The lad watched with open curiosity, obviously enjoying his master's skillful demonstration. But Sigefroi's well-honed skills wouldn't bring him victory this day. To keep a semblance of fairness, Melusine kept fighting, making the combat look evenly matched.

When Sigefroi dealt a particularly fierce blow, Melusine sent through her parrying arm a wave of energy like a lightning bolt. Sigefroi was thrown back, flying through the air. His sword and shield clattered on the dusty stone of the road. His helmet flew off. He hit the ground in a pounding of metal. Flat on his back, the knight didn't move.

In two steps, Melusine had Caliburn's point at his throat. "Do you yield?"

Sigefroi blinked, and the slow realization of his desperate situation showed in the widening of his eyes, along with a spark of rage, and something else... Surprise!

When he did not respond, Melusine repeated louder, "Do you yield?"

His words came with difficulty. Sigefroi, no doubt, had to swallow a great deal of pride. "I... do... yield," he croaked.

"In exchange for your life, I shall exact an oath." Melusine made her voice carry so that the young squire could also hear and understand. "Within a week, a royal princess by the name
of Melusine will ask for your hospitality. Not only will you treat her according to her noble rank, you will betroth her and take her for wife."

"What?" Sigefroi, in his surprise, had started to rise, but Melusine pressed Caliburn's point harder against the mail at his throat, forcing him to lie still.

"Swear on your knight's honor, or I kill you right now!"

In no position to bargain, Sigefroi finally said in a strangled voice, "I swear it."

The mail shifted as Sigefroi swallowed, and blood trickled at his throat under the sword's sharp tip. "I swear it on my knight's honor!"

Drawing back the weapon, Melusine returned the great sword to the scabbard. Sigefroi sat up slowly, coughing, shaking his red mane, and rubbing a grazed throat. Melusine didn't wait for him to get up or retrieve his broadsword.

When she whistled, the white mare came at a trot. She mounted swiftly and turned the horse around.

Melusine halted the mare and turned in the saddle, a wide grin on her face. She'd been waiting for this moment to deliver the coup de grâce.

The knight rose on unsteady feet. "If you won't give me your name, at least let me behold the face of my victor!"

The humiliation in Sigefroi's eyes and voice delighted Melusine. Slowly, she lifted her silver helmet and pushed back the head mail, letting her long hair cascade over slender shoulders. Staring at him with glee, she however measured her deliberate reply. "You were bested by a maiden, my lord."

Sigefroi's thunderstruck expression made her laugh. "But have no fear, your honor is safe with me. I shall keep your defeat a secret." After a mock bow to Sigefroi and his dumfounded squire, she spurred the mare away and didn't look back.

Posted by Vijaya Schartz at 2:17 PM