Laurel O’Donnell has won numerous awards for her works, including the Holt Medallion for A Knight of Honor, the Happily Ever After contest for Angel’s Assassin, and the Indiana’s Golden Opportunity contest for Immortal Death. The Angel and The Prince was nominated by the Romance Writers of America for their prestigious Golden Heart award. O’Donnell lives in Illinois with her four cherished children, her beloved husband and her five cats. She finds precious time every day to escape into the medieval world and bring her characters to life in her writing. 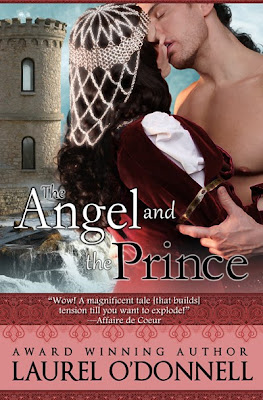 The Angel and the Prince

In this exciting medieval romance, the French lady knight known as the Angel of Death wages a battle of wills and desires against her dreaded enemy — the English warrior known as the Prince of Darkness.

Ryen De Bouriez is a French warrior, dedicated to protecting her country against the hated English. In place of glittering ball gowns, she wears shining armor. Instead of practicing the gentler arts, she wields a sword. Those who whisper her name in fear and awe call her the Angel of Death.

Bryce Princeton is the Prince of Darkness, an English knight sent by his king to find and destroy their most hated adversary — the Angel of Death. Little does he know that his enemy is no man at all, but a beautiful woman who will challenge his heart and honor at every turn.

Forced to choose between love and honor, the Angel and the Prince wage a battle of wills that challenges everything they have ever believed in. 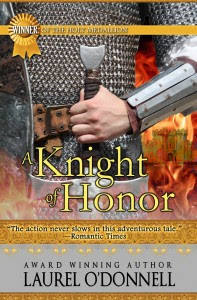 A Knight of Honor

Taylor Sullivan is a raven-haired hellion fleeing the tragic flames that destroyed her family. She arms herself with a quick sword and a sharp tongue, hiring herself out as a mercenary, willing to do whatever it takes to survive.

Slane Donovan is a knight of honor, sworn to uphold his oath and his word. He seeks the woman who wears the Sullivan ring, determined to bring her back to Castle Donovan to fulfill a promise made to his brother.

When he finds the fierce young beauty, her sensual innocence inflames his heart, threatening to destroy the very essence of who he is and the vows he has sworn to uphold.

But there are others who seek the Sullivan woman as well, men who pose a far greater threat. Slane must protect his fiery mercenary companion from attacks, but can he protect himself from her undeniable charms?

More books from Laurel to come in a few days. Stay tuned. In the meantime, find out more about her and her books on her website at:
http://www.laurel-odonnell.com/
Posted by Vijaya Schartz at 1:00 AM